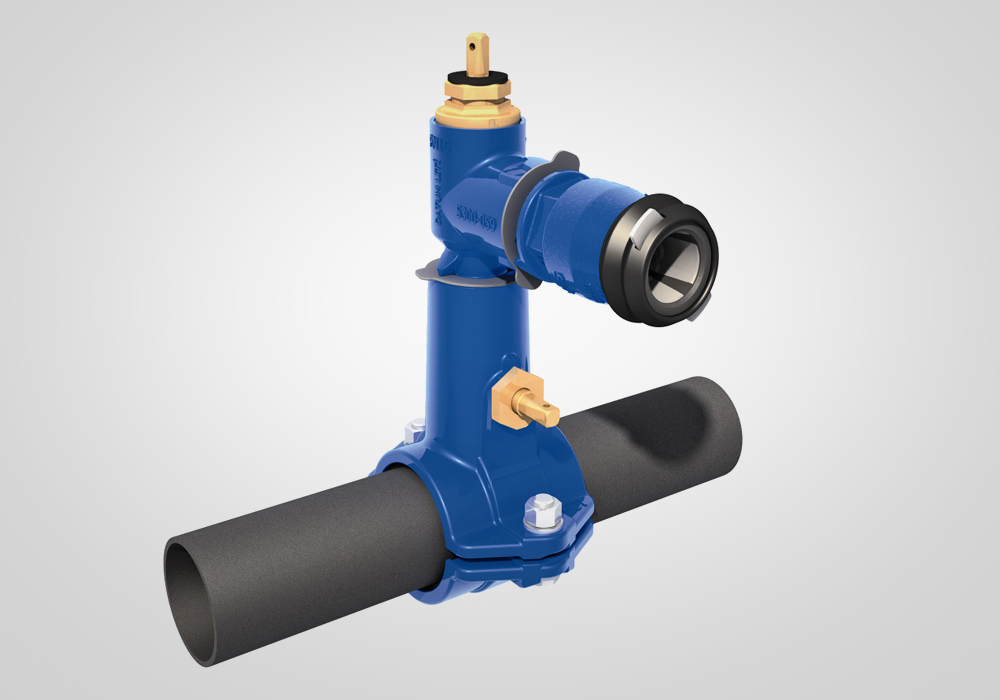 The basic idea of a modified bayonet plug-in connection was inspired by the VAG BAIO®plus system. The patented VAG TERRA®lock plug-type system for house connection applications offers a great variety of options for the fast and easy installation of new house connections, in refurbishment works and wherever space is limited. The diverse combination options of […]

Come and celebrate with us! At the IFAT 2022 in Munich, which takes place from 30 May to 3 June, we are celebrating the 150th anniversary of our company together with our customers and partners. 150 years of ideas, art of engineering and passion. Millions of valves performing essential functions all over the world. We […] 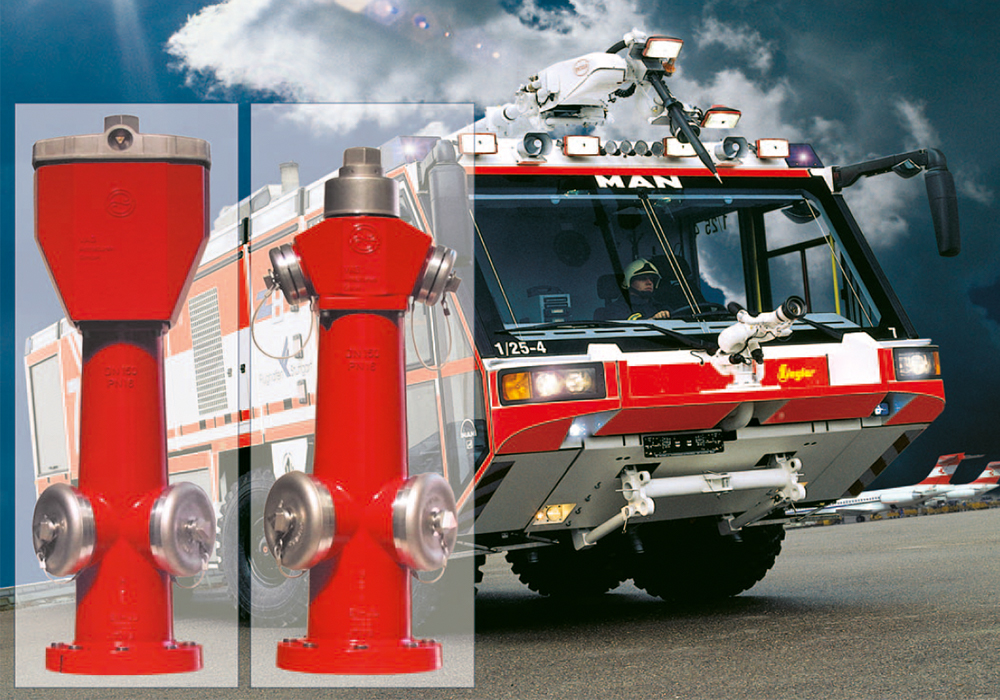 The company sets new standards with this industrial hydrant. For its development, the VAG team cooperated closely with the Turbomachinery Chair of the University of Kaiserslautern. The result is the flow optimised internal geometry of the hydrant. It allows a significantly increased flow rate and the quality of the materials the hydrant is made of […] 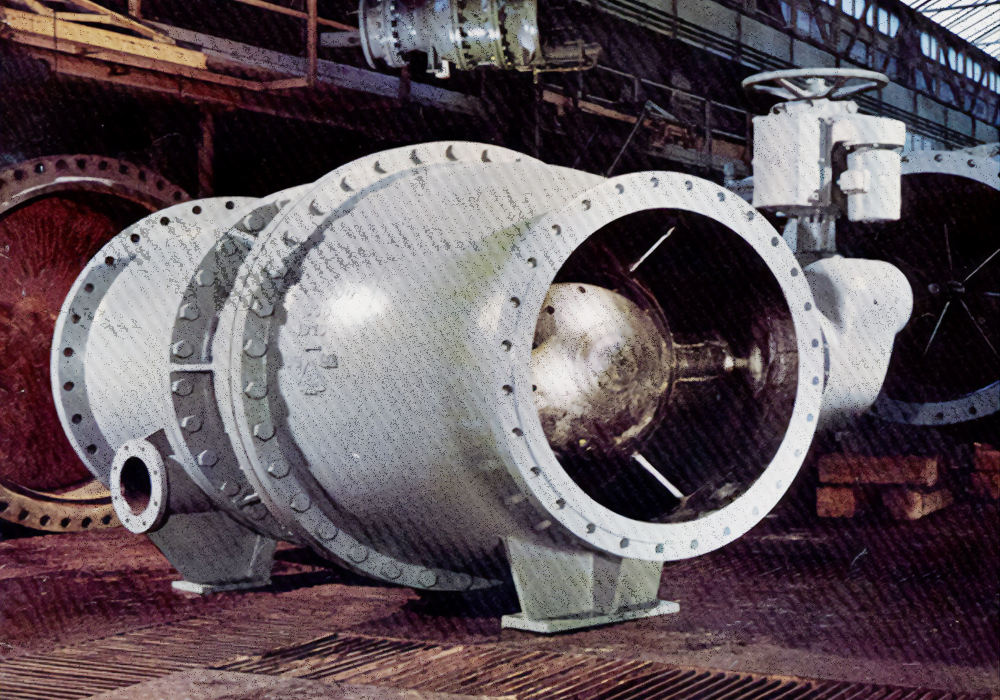 The streamlined predecessor of the RKV and RIKO Plunger Valves In 1932, Bopp & Reuther developed the so-called annular slide and metering valve, the predecessor of today’s plunger valve. The idea came from America at that time. The installation of venturi metering tubes together with gate valves in a pipeline needed a lot of space […] 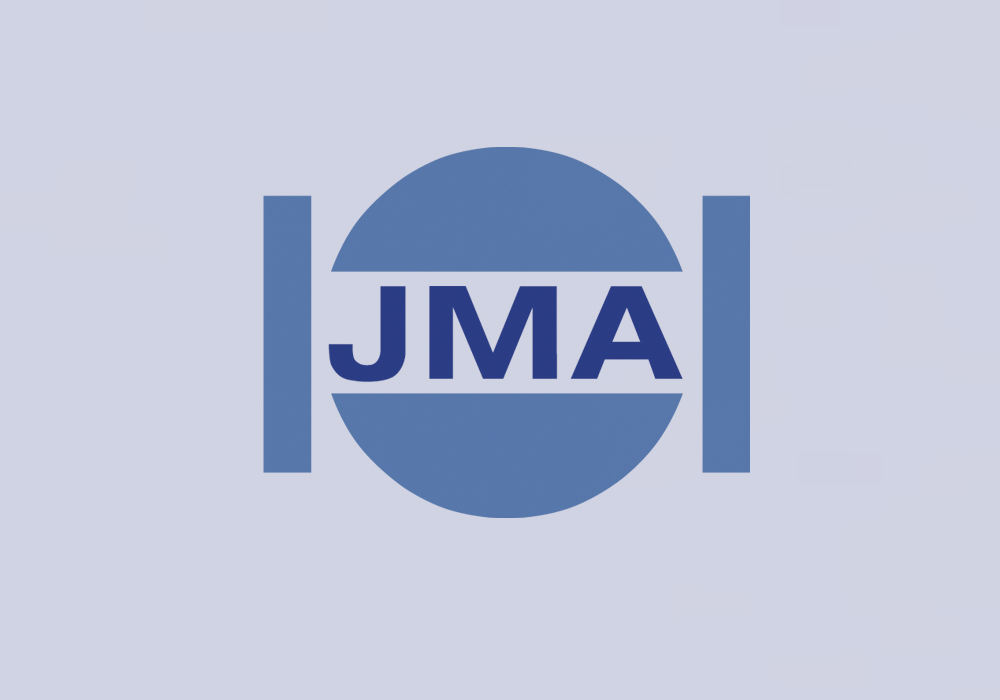 An important milestone for VAG and the Czech company with a long tradition. In 1996, Bopp & Reuther AG becomes the majority owner of the well-known valve manufacturer. At that time, the company also returns to the name of Jihomoravská armaturka, spol. s r.o. Founded in 1881 as a design office and locksmith’s shop in […]

Blue is the new red 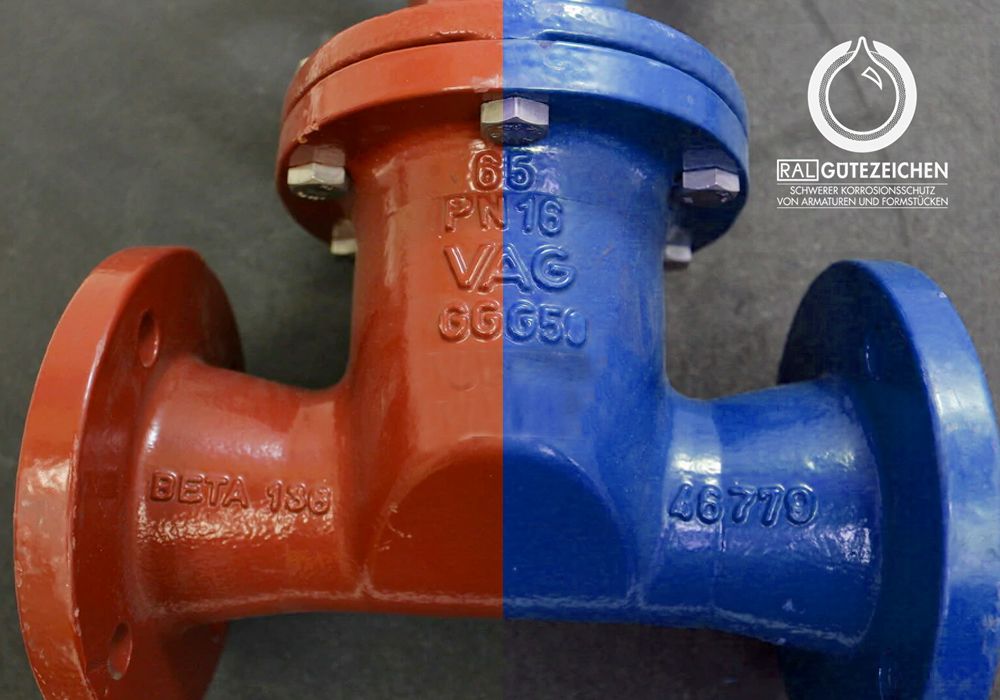 The standard colour of VAG valves changes from red to blue. This change is in line with VAG’s membership in the Gütegemeinschaft Schwerer Korrosionsschutz von Armaturen und Formstücken (GSK – Quality Assurance Association for Heavy-Duty Corrosion Protection of Valves and Fittings). The quality association is a joint organisation of the largest valve manufacturers aiming at […]

The invention of the EKN 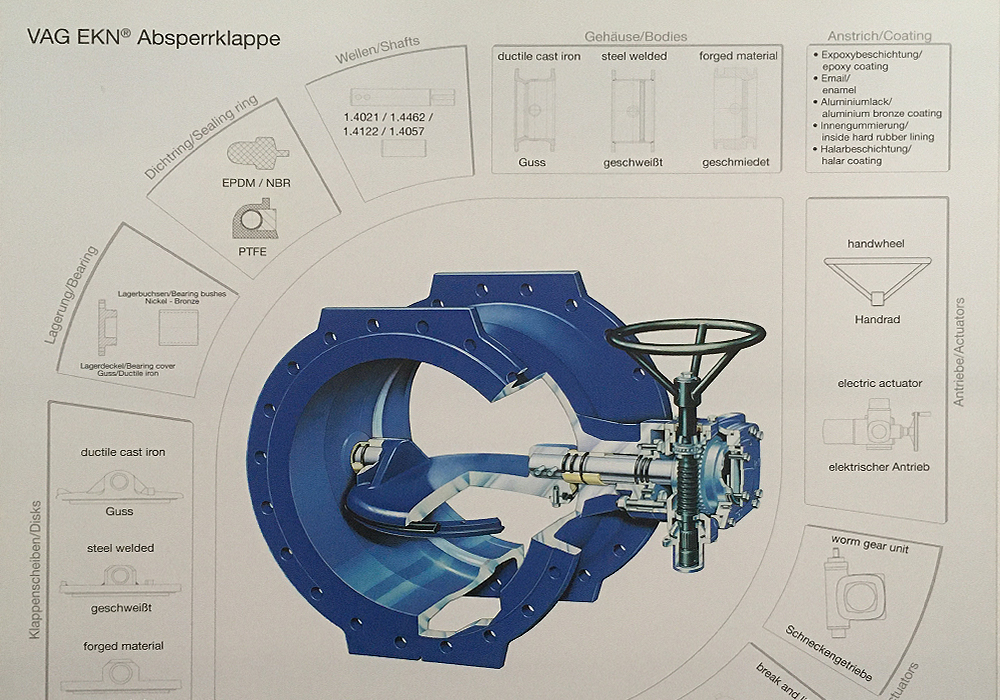 The technical and economic advantages of this new type, which was presented in 1976, revolutionise the use of valves in water supply. Compared to its predecessor, a shut-off valve with centric bearing, the innovation of the new type is the double-eccentric bearing of its disk. Through the shift of the point of rotation, the seal […] 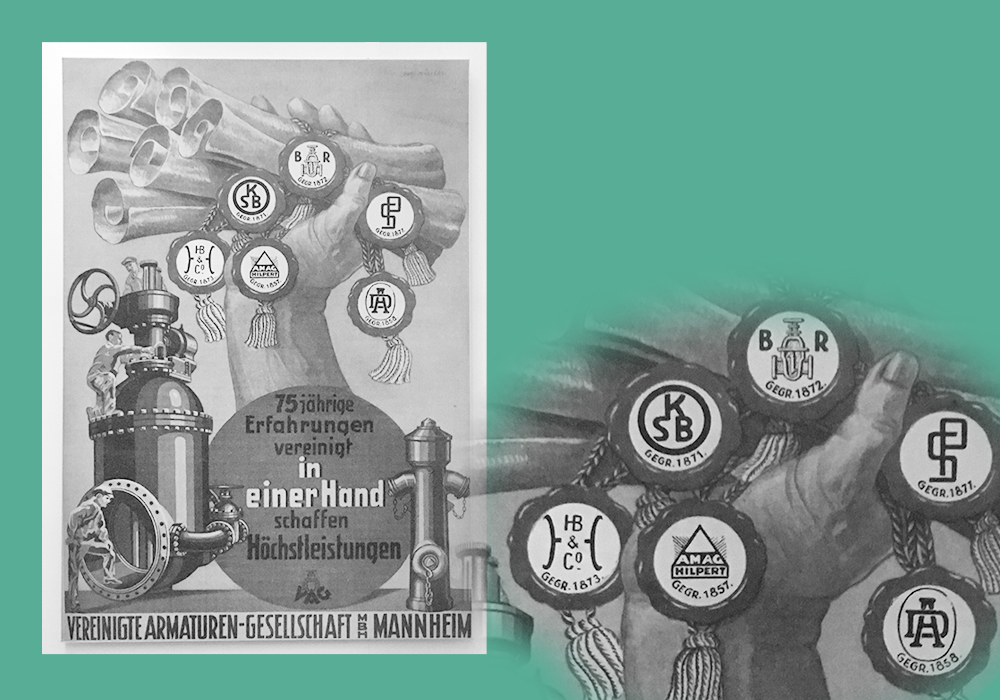 In 1924, the introduction of the Rentenmark, a temporary German monetary unit, stopped the hyperinflation in Germany. A worldwide economic boom begins – the Golden Twenties. This is also the time in which the name VAG was born. On 12 February 1925, the articles of association of a joint distribution company are set up. Seven […]

The company is thriving. In the year of its 25th anniversary, no room is left in Mannheim’s Neckarvorstadt district for the company’s extension. It is in Waldhof, a suburb of Mannheim, where Bopp & Reuther purchases a plot sized 165,000 sqm and first builds a foundry. The relocation of the water valves, steam valves, pumps […] 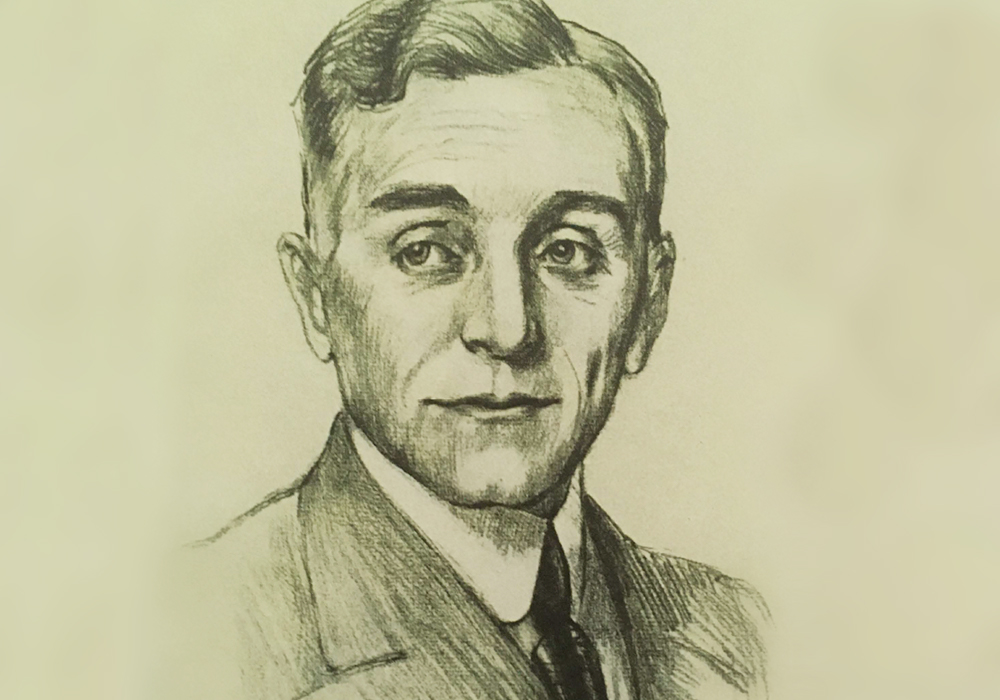